I have always been moved by ritual. My parents would tell me the story of when I was little and how I would stand in the aisle at church and mimic the priest as he performed the liturgy. The older women in their babushkas would ‘tsk-tsk’ and say how disrespectful my behavior was. In this my mother would strongly disagree and tell them that I was honoring the priest in my copying of his work.

I loved the mindfulness of it. I loved the incense. I loved the reverent energy that permeated the space within the church. I was able to feel into it. It wasn’t the container I was worried about, it wasn’t about how it looked, it was about how it felt and the connection with the Divine it created.

I have moved away from the grandiose, repetitive show of ritual for rituals that require a period of reflection in preparation for setting ones intent. Or even better, the ritual that spontaneously emerges from within oneself.

That happened to me two years ago the day after New Year’s day. I had made the sudden decision that I would go to San Diego on New Year’s Day and go have some time with Mama Ocean. The drive served as my meditation time and I had the vision of offering flowers to the Ocean the morning I was to leave.

Well, I found myself somewhat overwhelmed at being in a new city and played it safe on where I traveled so I did not get any flowers.

The morning I was leaving I walked along the beach, letting Mama Ocean soothe my very raw soul as I shared my salty tears with her gentle touches of the incoming surf. I was feeling ashamed that I hadn’t been brave enough to explore and find a place that sold flowers so I had something to offer Her in return for her nurturing.

It was then that I noticed it… a perfect red carnation lying amongst the stones and shells in the damp sand. Carnations are one of my favorite flowers from childhood. I love the smell, the fact that they last an extraordinarily long time and that I have a lot of positive memories regarding carnations.

The moment was dramatic and comical at the same time. I felt the hairs on the back of my neck rise up as the significance of what I found sunk in. I picked up the carnation and proceeded to do that exaggerated gaze behind me, as when someone says something that completely catches you off guard and you look around like “Who me?”

I was completely alone on the beach.

In that moment I experienced what I have come to recognize as a moment of Grace. Whether that is felt as something being bestowed from outside of one’s self or gifted from a place deep within ourselves, maybe it is one in the same, truthfully I don’t believe it matters.

I remember being filled up with gratitude at this gift, so that I may gift it back in return. I declared my intent to the universe in that moment to become healthy in mind, body, spirit and soul. It’s been a damn amazing journey.

That brings me now to Michelle’s Love Thyself event she held as an alternative to all things norm conforming that is present in Valentine’s Day.

I was all for it. Michelle had been talking about wedding yourself for a few months at this point and I was beginning to see how I had never made myself a true priority, even after the I set my intent in San Diego. It sounded fun, casual and quite non-threatening.

Then it got to be the week before and I hadn’t written one damn word of my vows. Soon others began to beg off, most with bullshit excuses so they wouldn’t have to fess up to what was really going on with them. I knew. I was feeling it too. This was hitting someplace deep. Someplace that had been safely tucked away under my bed. Something that until now I had completely forgotten. 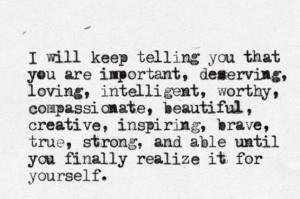 Would I be someone that I wanted to marry?

Ewwww. I so did not want to go down that road, yet do we really have a choice? I am the only person I will go to sleep with and wake up to for the rest of my life. It was damn well time that I began to examine the current state of my relationship to myself.

It was like experiencing the worst date EVER. Couldn’t maintain eye contact, stuttered and stumbled over what to say, felt various degrees of embarrassment, shame and guilt about not doing this sooner. The only thing was I couldn’t call a friend to bail me out, so I sat with myself and began to ask questions. What makes you happy? What brings joy and a smile to your face? What is it that makes you feel loved?

As I concentrated about those aspects of my life I began to hear the voices of those people who have told me how I have impacted their lives. I recognized the solid friendships that I have and how I admire my friends and hold them in high regard. If I trust their judgment and discernment, then who am I to question their assessment of me? They have chosen to include me in their lives, I am worthy of their time, it is not arrogant to honor what others see in you.

The wall I had faced in writing my vows fell away and the ideas came rushing in. Needless to say, it was very flowery, and quite lengthy. I finally forced myself to stop as I know that I can go on and on and on. I do have a lot to say.

The day of the ceremony, about 4 hours before it was to begin I suddenly knew what my vows needed to be. Of course I was in the shower. I mean, who has life changing ideas when you have pen and paper close at hand to record it right?

So I chucked all the flowery frou-frou stuff and went back to a ritual I had created in my early pagan days that reflected on the myth of Inanna  and her journey to the underworld to visit her grieving sister.

In order to gain entrance, Inanna had to divest herself of the trappings of what made her Queen of Heaven. Her crown, her headpiece, necklace, breastplate, belt, girdle and her clothing. These correspond, at least for me, to the 7 main chakras.

In my late 20’s I did a very intensive year of shamanic study and one of the teachings in this paradigm was the energetic enemies that house themselves in our chakras:

I made that the basis of my vows, to acknowledge these enemies and how I would move through them into something positive. Being like Inanna at this point stripped naked and vulnerable I invoked that little girl so long ago that had no understanding about why she carried this feeling of utter worthlessness that has shadowed her entire life. I vowed to be there for her. To love her, encourage her and protect her from that day forward.

I stated clearly and consciously – I am enough!

Days later I began to notice that I felt different. A space had opened up for me. I found I wasn’t second guessing myself. I found that I wasn’t worrying about what other’s opinons were of me. I went searching for that girl who wanted to be liked by everyone, no matter the cost to me. What I found instead was my surety that what I had to say mattered. It mattered because the Universe brought me to this place that the bubbled up.

Not arrogant, I was secure in who I was. I knew myself and I knew what was right for me. I truly felt what it was to love myself.

That is the new defining moment that will carry me into my future.

Are you able to look in the mirror and say with love flowing through your entire being – Yes, I will marry you?

This site uses Akismet to reduce spam. Learn how your comment data is processed.